SET OF THE MONTH

Everyone loves a great deal! And each month The Chess Schach, or rather, my dear wife Angie (as this was her idea!) will select a listing from THE GALLERY to feature as our SET OF THE MONTH. This entitles you, our dearest customer, to a 10% discount on the asking price, which, of course, already comes with our complimentary free shipping!
My heart can’t take Angie’s ideas I tell ya!!

**addendum … it is February 2021 and I have taken control of the SET OF THE MONTH (insert evil laugh here!). It was my idea, after all. My selections may not be based on the eye of an artist or the brain of a chess nerd, but I’m looking forward to choosing a new one every month from the heart. This time, it’s personal. Hope you like them! – Angie

✨ANGIE’S PICK FOR SET OF THE MONTH ✨

One of the last patterns of the Soviet Grandmaster series of chessmen which featured heavily in Soviet chess tournaments leading up to the collapse of the Iron Curtain in 1991. The name of the set reflects the Russian Civil War of 1918-22 when the communist ‘Reds’ battled the anticommunist White Army backed by Europe and America, and as we know, the more organized faction won the day leading to almost seven decades of cruel and oppressive Soviet rule – but perhaps you can change this blot in the history books by toppling the Reds with the White Army yourself!?

For more details about this gorgeous set, please click here. 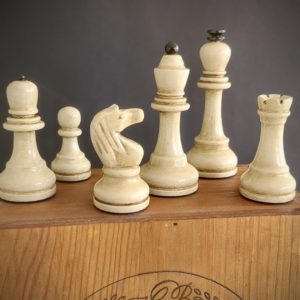