Our latest listing is a slightly mysterious – as the original designer is unknown – medieval-themed chess set that oozes earthy, organic character and transports the chess-player back in time to when sets such as these would have been carved from bone or tusk by talented community artisans eager to gain favour with the more elite members of medieval society. THE HUNTERS are quite obviously inspired by the well-known 12th century Isle of Lewis chessmen of Norse/Norwegian origins. However, in my own opinion, they seem to represent the English king, Edward III of Windsor (reigned 1327-1377) and his wife, Queen Consort Philippa, one of England’s most popular and successful kings and quite fittingly a distant descendant of the Viking (Norsemen) invaders via his ancestor (several generations back), the ‘Bastard King’, a.k.a. William I of Normandy, the ‘Conqueror’ of England in the famous battle on the shores of Hastings in 1066.

There are many spin-offs to the original SAC replicated Lewis chess pieces, some good, some not so good, but this is an absolute favourite of mine as it suggests a natural progression from the Lewis chessmen, but speaks not of battle-hungry invaders, but more of settlement, order and a developing ‘English’ culture that is slowly converting from a largely pagan Celt society to one of Christianity during the 1300s.

This is most evident in the figure of the knight, a clear Christian reference to Saint George the Dragon-Slayer, patron saint of shepherds and armourers since the third century, and later the whole of England itself. On the subject of sheepherders, the ‘bishops’ carry sheep over their backs but are too well dressed for shepherds. More likely they are monks/landowners (signified by their bald patches) with sheep representing taxes, or the collection thereof, another reference to a somewhat orderly society (sheep also feature prominently in the history of St George should you wish to explore).

The rooks (wardens) like the knights, are dressed for battle and bellow on an ‘olifant’, Old Norman lingo for a trumpet or ‘sounding horn’ used both in battle and in hunting game as a loud and convenient way of communication. The theme of hunting can also be seen on Queen Philippa’s arm in the form of a bird of prey. This would have been a female merlin according to Royal protocol in The Boke of Huntynge and Hawkynge (St. Albans Press, c.1485), a bird fit for a queen (the king would carry a golden eagle, the prince a male merlin) and signifies power and the ability to strike prey (the enemy) from afar – all quite fitting really! The theme of ‘the hunt’ also carries across to the king, as he sits upon the throne protected by two faithful hounds. These would most probably have been Irish wolfhounds or lurchers, as it’s recorded that Edward sent “Reginald” his ‘Master of the Hunt’ to Ireland with the aim of procuring “19 hunting dogs” in 1335, two of which, perhaps, are portrayed here.

The original pieces came in a rather uninspiring black vs. white finish, a shame, as the detail work (which I have enhanced or ‘elevated’ as my wife says) deserves to be showcased rather than simply sprayed over. This situation I have attempted to remedy by individually hand-painting each piece. The light side in antiqued soft almond and gold, the dark pieces in antiqued olive green and bronze (as you may be aware, a running theme for our listings for 2021).

The pieces are cast in Herculite Stone, which is softer than some of the harder resins of the common Figural sets of late. Therefore, I would advise they be treated the same as a bone set and used for casual, less energetic play rather than Blitz. But like all of our sets, they come with a lifetime warranty, therefore if damage does occur I will happily repair them for free – but I’m sure you won’t be as carefree with these beautiful chessmen!

All of our chess pieces are UV resistant and ideal for display as well as casual play and both kings carry the hand-painted iridescent bronze ‘Power’ signature of the artist on their bases. THE HUNTERS also come with a ‘Certificate of Artistry’ which will be posted separately once we tally up how many listings passed through our galleries in 2021 – “All good things …” as the wise man once said. 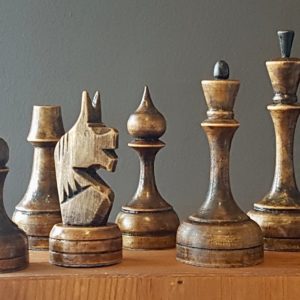 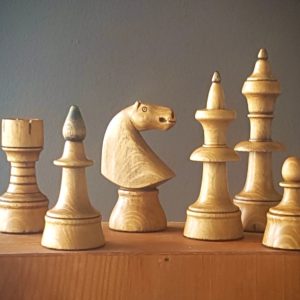 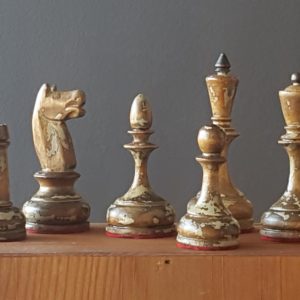