An extremely attractive, ‘unique’ interpretation of a classic Soviet design named after the Moscow International Tournament of 1935 when the future World Champion Mikhail Botvinnik and Salo Flohr tied for 1st place while the great Emanuel Lasker and the Cuban legend, Capablanca, placed 3rd and 4th respectively. Several variations of these distinctive chessmen (characterized by the ‘flat’ mitres of the bishops) were widely used throughout the USSR between 1930 and 1960 and are considered in chess collecting circles to be one of “the most iconic Soviet designs ever produced” (qu. Chuck Grau: ‘Soviet and Russian Chess Sets’ Facebook group). There is also a well-circulated photograph (included in the gallery) of this later ‘BFII’ design snapped at the Moscow Central Chess Club in 1958, when the 15-year-old American, Bobby Fischer, was invited to play a blitz match with the Soviet legend, Tigran Petrosian. Another clash between them in 1958(“The Bear Hug”) is the 3rd game featured in Fischer’s 60 Memorable Games (F&F 1969).

As you can see, there is a twist to this set! A couple in fact, but the main one is the opposing coloured signifiers of the bishops, which makes them much more identifiable from the queen in fast play – a common irk amongst blitz players regarding this particular design. Problem resolved! In fact, these very chess pieces are the subject of my January Chessay ‘A BFII … WITH A TWIST, PLEASE!’ just hit the ALL ABOUT CHESS link on our Home Page to see how this once unplayable set was transformed from a purple and black cygnet into a jaw-droppingly dazzling Soviet swan!

You may too have noticed a hint of antiqued iridescent bronze on the rings above the collars of the royals and clerics. This will be a recurring theme in our sets of 2021, marking our third year of opening up The Schach. Keep ‘em peeled!

All of our chess pieces are UV resistant and ideal for display as well as casual /blitz play and both kings carry the hand-painted iridescent bronze ‘Power’ signature of the artist on their bases
Each set also comes with a ‘Certificate of Artistry’ which will be posted separately once we tally up how many listings passed through our galleries in 2021. “All good things …” as the wise man said. 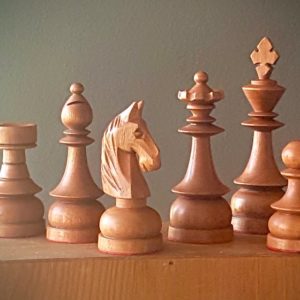 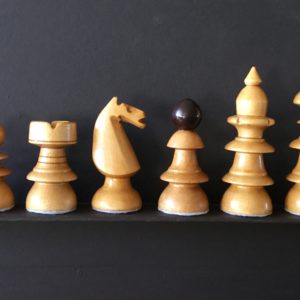