A particularly fine and rare example of post-tzarist era chessmen that were manufactured during the years leading up to WWII. This slender, yet solid pattern is quite unique amongst sets produced during the Stalin years, which I’ve described in the past as Art Deco meets Soviet Staunton with a modernist twist. A later, much more simplified example of this pattern from Belarus (Pterodactyl Knights) can be seen in our Archive Gallery (page 9). I’ve also come across very similar Artel ‘Kultsport’ sets from the Moscow region dated to 1936.

On the website chess-museum.com the late Nicholas Lanier simply described them as “Svelte” (from where we respectfully borrow our playful moniker) and notes German and Austrian influences which cannot be ignored. In fact, this set is found under ‘German Sets’ in the museum with a hint at its true Soviet origins.

Interestingly, Lanier also noted some loose weights in his set, and likewise, there were quite a few – at least a dozen – that have been secured in this set, too, along with two chipped collars which have been restored. The original patina of the light side has hardly been touched. It is rich, smooth and absolutely beautiful, only a few unsightly gauges have been repaired and invisibly matched to the original patina.

The dark side was another matter altogether. Unlike the light pieces it was rough to the touch, uneven and flaking off in areas. I decided to refinish it completely with the emphasis on recreating the smooth, deep finish of the light side. In my photos, the pieces look black, but in fact they are a deep, deep brown which is only evident when placed in the sun. With your eyes closed, you will never be able to tell the difference in feel between the original light pieces and refinished dark pieces – my main objective.

The respected German collector, Dr. Holger Langer (author of ‘On the Collecting of Chess Sets’) once said of my work, “old sets with a new set feel” and these kind words certainly apply to the Svelte Army.
See chess-collection.de for more info on Holger’s new book.

Both kings carry the hand-painted, iridescent copper ‘Power’ signature of the artist on their bases. Gracilis Militae is also accompanied by our hand-drawn ‘Certificate of Artistry’ which will be posted out separately once we tally up how many ‘Copper Signature’ sets pass through our galleries in 2022 “… all good things …” as the old saying goes.

For more info on the CoA please see our Jan. 2022 Chessay on the ALL ABOUT CHESS page. 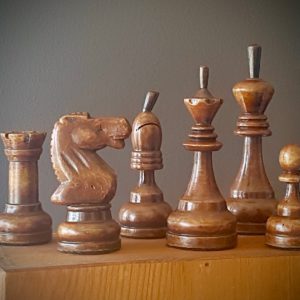 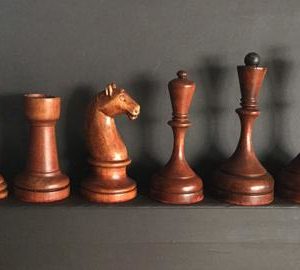