The upper body of the knights and the finials of the king and queen are fashioned from wood, the remaining chess pieces are made of carbolite and weighted with sand. The knights are borrowed from an incomplete French Regency set c.1950, the Soviet pieces are of roughly the same era.

This was quite an exciting project for me – a one-off creation of my own making! – a reinvention of two different sets from two very different countries but with some very interesting similarities. The Soviet set has clearly been influenced by the French/Regency style of chessmen that became popular around the time of the French Revolution in 1789. These designs were particularly popular at the famous Café de la Regence in Paris, from where the name Regency or Regence originates. A design of this ‘classical’ nature is also somewhat unusual in Soviet sets, particularly after their own revolution in 1917, when opulent looking designs were considered ‘bourgeoisie” or ‘for the upper classes’ and focus shifted quite intentionally to more solid and functional designs for the masses. In that respect, these pieces are quite ‘revolutionary’ unto themselves considering the era in which they were born!

Regarding their reinvention; the original knights on the Soviet set just didn’t work for me, they were wafer-thin and rather ‘cheap’ looking, detracting from the overall beauty and elegance of the other pieces. Therefore a decision was made, “Off with their heads!” – said like a true revolutionary! By chance, I had an incomplete Regence set (missing several pawns and a rook) that I decided to put to good use. The knights were absolutely perfect in shape, height and size, but now the set swayed more towards France than Russia, a minor problem that was solved with the addition of traditional Soviet finials which also added much needed height balancing the set perfectly.
My sincerest hope is that the future owner forgets all of the above and enjoys the set for what it is: a perfectly playable and very attractive band of revolutionaries! 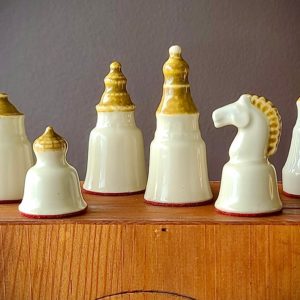 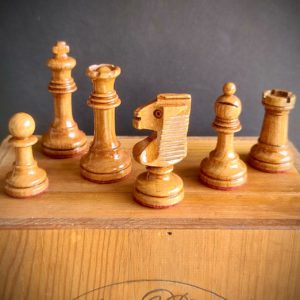 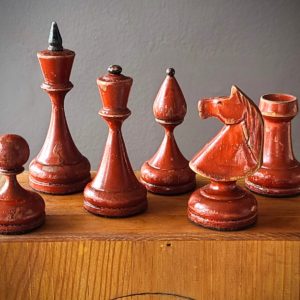 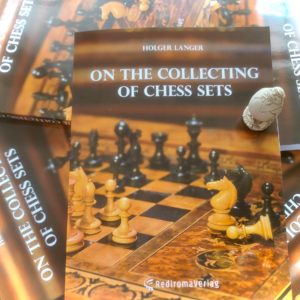